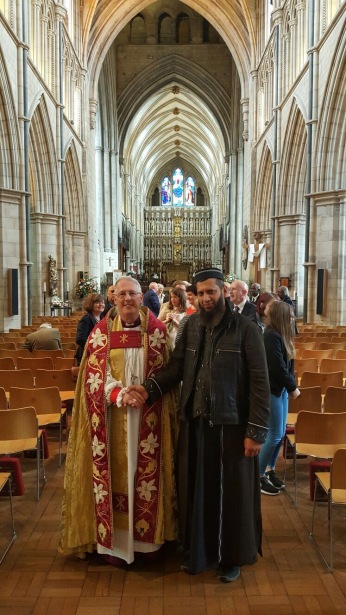 Royal Trinity Hospice provides free, skilled, compassionate care and support to people with progressive, life-limiting illnesses and those close to them.
Visit www.royaltrinityhospice.london to find out more

Today Saturday 20 May 2017,  I attended Southwark Cathedral for a thanksgiving celebration for 125 years of service by the Royal Trinity Hospice, Clapham Common.

Michael Savage,  the spiritual care lead invites me to visit and give support to the Muslim patients at the Hospice.

I was invited as a dignitary to be part of the procession led by the Bishop of Southwark, the Right Reverend Christopher Chessun.

The Bishop later sent me a message of appreciation for my attendance. 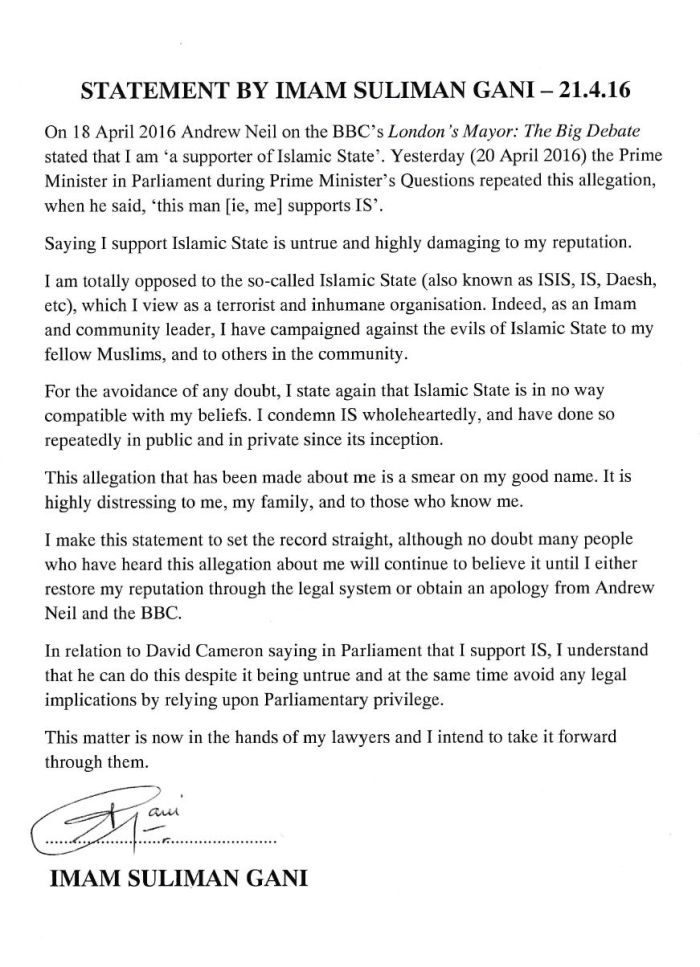 Thank You for visiting my blog page.

Over the last few months, as the campaign to become London Mayor has gathered paced, I have been disquieted by the anti Muslim rhetoric that has been coming out of the Zac Goldsmith campaign. This took a particularly nasty turn, when his campaign started to single me out as an “extremist” and “one of the most repellent men in the country”  http://www.standard.co.uk/news/mayor/zac-goldsmith-accuses-rival-sadiq-khan-of-giving-platform-to-extremists-a3224246.html)  You can only imagine my shock at this news, and I am grateful to the many journalist who have sort to highlight the inconsistencies in their attack against me http://www.theguardian.com/uk-news/davehillblog/2016/apr/14/london-mayor-goldsmith-attacks-backfire-as-repellent-imams-tory-links-emerge , http://www.independent.co.uk/news/uk/politics/zac-goldsmith-posed-for-photo-with-extremist-imam-who-he-attacked-sadiq-khan-for-meeting-a6983751.html

It seems that his campaign was attempting to harm and discredit me in order to smear Sadiq Khan MP, by virtue of the fact that I was the Imam at Tooting Islamic Centre, which is based in the same constituency as Mr Khan, and therefore we must have “shared platforms” together. The implication being, that by this association, Mr Khan was also a supporter of “extremism”

I have been accused of saying that women and subservient to men, of being a supporter of terrorism and a “hate preacher”. All of which are untrue. I have started this blog to share what my true opinions are on these matters, and to provide a much wider range of knowledge on the true beliefs of the Religion of Islam.

( Note: I have included links to pages on Wikipedia for those who would like to further explore ideas that I have presented. I acknowledge that this source is not always the best place for accurate information, but I hope that it provides a starting for further research)

I was born in South Africa. From a very early age I had yearning for truth and knowledge, much of this sparked by being a first hand witness to the atrocities that were being committed by the Apartheid regime at the time.

I was curious and inquisitive young man and was keen to travel and explore the world that was opening up to me.  I studied in Pakistan for three years at Jamia Islamia Binori Town, travelling back and forth to South Africa whenever I have an opportunity to do so.  A friend of mine had applied and was admitted to the Azhar University in Eygpt. By now I had developed a wanderlust and also applied to study Arabic/ Islamic Studies and was accepted. I then spent the next two years living and studying in Cairo.

One of the highest learning academies in Islam is the Medina University in Saudi Arabia and it was my ambitions to study there. But its prestige meant that they were very selective in who they admitted. From South Africa they usually only admit around about 9 or 10 students a year. There are a number of quirky facts and coincidences involved in how I applied for entry, including a dream which my mother had, and prospective in –laws, but I was honoured that in 1994 I was the only South African admitted to their Faculty of Hadith in that year. I spent the next 4 years immersed in scholarly learning on the origins and interpretations of Hadith (https://en.wikipedia.org/wiki/Hadith)

At the end of 1998 I travelled to London as a stop-over to attend by brother-in-laws wedding in Portugal. Again, by another series of coincidences. I had the opportunity to study at the School of Oriental Arts and Science (SOAS) at the University of London where I undertook an MA in Islamic Studies which I completed in 2001.  An opportunity came up to teach at Balham Mosque where I was also appointed Part Time Imam and undertook a number of duties including teaching primary aged children in Quran and undertaking community work.

The spark for social justice that was first stirred in me in South Africa was beginning to reignite as I saw injustices emerge around me, and I started to spend more of my time opening up the Mosque to community-led campaigns and promoting alliance building for community cohesion. I was particularly keen for the Mosque to be seen as hub for the local community and to be used much more by our young people, of all faiths and none.  Amongst the events which we organised were regular Open Days, Exhibitions on the contribution of Islam to the development of science and media and Inter-Faith events. One of my initiatives was a Community Radio Station which we ran through the Holy Month of Ramadan onto which we invited a wide range of people to share information and views with the local community, including the Borough Commander of Police, the Director of Public Health and the local Mental Heath Trust.

Amongst the positions that I took up was to act as Muslim Chaplain and St Georges Hospital, where I offer pray and support to those who request this, and have been able to comfort many people, of all faiths and non. I also act as an enabler of conversations between Muslim patients and hospital staff whenever called upon.  I continue to be active campaigner for social justice, and travel around the country visiting mosques and community gatherings sharing the faith of Islam and its teachings.

I live in London

The status of Women in Islam is that they are equal but separate, in that they both have different responsibilities, particularly within the context of marriage. An example is the duty placed on men to take care of and provide for his family, and his earnings must be primary for this purpose. Whilst the women’s earnings are primary her own use to do as she chooses. This was considered important by the Prophet

I was recently on a family visit to Morocco where I had the honour of visiting the University of Qarawiyun the oldest university in the world which was established by Fatima Fihrinfez  https://en.wikipedia.org/wiki/Fatima_al-Fihri  in 859 CE

These are examples of strong, independent and empowered women leaders within Islam and the types of role models that we encourage all girls and women to aspire too.  A further list on female role models within Islam can be seen on this page, as well as an example of the debate on “Islamic Feminism” https://en.wikipedia.org/wiki/Islamic_feminism

One of the most important verses in the Quran to reflect on this matter is Surah Al Ma’idah (5:22)

Any Muslim who does not subscribe to this tenant falls outside the fold of Islam.

I often teach on the decrees laid down by Umar ibn Al-Khattab who when entering Jerusalem declared that they City will be place where all faiths will be allowed to be practised https://en.wikipedia.org/wiki/Pact_of_Umar

I condemn all acts of terrorism. Terrorist acts are a crime against all of humanity. I have been deeply affected by every death as a result of terrorism.

In commonality with all monastic faiths, Islam is opposed to same sex marriage. As part of the recent debate on this issue I supported the Coalition for Marriage https://en.wikipedia.org/wiki/Coalition_for_Marriage

It was a vigorously argued debate with opposing views on all sides. The matter was settled on the side of same sex marriages, and this is something which we all must accept.

People of a different sexual persuasion are no less human than the rest of us. Islam teaches is to be tolerant and accepting of all people, regardless of their faiths, backgrounds or sexual orientation.

A few years ago I was part of Channel Four series called “Make me a Muslim” in which I shared many engaging conversations with Luke, a young gay man. You could see this on You Tube ******

Here is a brief history on this community https://en.wikipedia.org/wiki/Ahmadiyya

In the Quran it is made clear that the last Prophet and Messenger of Allah would be Muhammad.

Therefore, for this community to suggest that their Leader Mirza Gulam Ahmed of Qadiyan to be the Promised Messiah and believe that the Prophet Jesus Christ died and was buried in Kashmir, Pakistan. These beliefs fall outside the settled views of all the recognised authorities of Islam.  They are therefore considered more a cult, then they are as part of the mainstream Muslim community. As a religious scholar it is incumbent on me to make people aware of the knowledge and teachings of Islam and to share these in the spirit of open and honest dialogue.  It is for others to decide the rights and wrongs of particular arguments that are being presented.

Islam protects their right of everyone to practice whatever religion they choose. Or to practice none if they chose to do so. I condemn all acts of violence, terrorism and persecution against anyone because of what they choose to believe.  I was saddened to hear about the recent killing of a member of the Ahamidiyya community in Glasgow, and hope that the perpetrator will face the full force of the law for this atrocity.

I believe in this statement, (usually attributed to Alexis de Tocqueville the celebrated French political thinker and historian) that “we get the leaders that we deserve”

There as some within the Muslim community who say that voting in elections is “haram” or forbidden, I do not subscribe to this view. I believe that as citizens we have duty to participate in all elections and to be active members of the communities in which we belong.

I champion community cohesion and spend much of my time in inter-faith dialogue, encouraging people of all faith and non to have conversations and debate. So that we can all get to know and understand each other better.  I believe that by doing this we can find common cause, and develop ways in which we can work together to tackle the social ills that affect us all – from the need to provide food and shelter to the most vulnerable members of our communities, to welcoming Refugees and Asylum seekers into our communities as brothers and sisters in humanity

shaykhsuliman
Create a free website or blog at WordPress.com.